The Garfield Diner. Not just for Breakfast or Lunch

I feel the need to report to you about my recent visit to the Garfield Diner in Pottsville.

In Schuylkill County we have a variety of dining options, especially when it comes to lunch. Now working in Pottsville, there are still several places to eat and yesterday, I made my way to the Garfield Diner along Market Street. 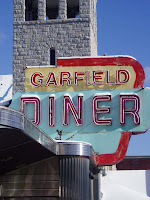 Over the last nine months, the Garfield Diner has been transformed by Bill and Lena Kontogiannis. Prior to operating the Garfield Diner, Bill ran a restaurant in Lancaster PA. But anyway .. over the last few months I have stopped in for lunch, and have developed a strong liking for their soup. Since the Pottsville Eatery closed two years ago, I have been searching for a great soup (or two) at lunchtime.
Yesterday my choices were Crab Vegetable, Cream of Brocolli and Chili. The problem with that is, they are all favorites of mine. So hey, I asked for a bowl of Crab Veggie and the Cream of Brocolli. Good choice. Both were warm, tasty and simply perfect.

Let me rewind. When I stopped at the diner, I noticed that a crew from Sam Son Productions

was just wrapping up a shoot inside the diner. On the counter, I noticed a Club Sandwich nicely decorated on a plate, alongside a plate of a meat dish that was laid atop a bed of rice and topped with a mushroom sauce. A freshly cut piece of cake was positioned right next to that. I figured, the crew was shooting the food as part of the commercial. So getting back to my soup ...
As I finished my soup, Bill was taking the two platters back to the kitchen and I remarked it was a shame that he had to get rid of the food. He looked at me and asked if I would like either dish. I hesitated (because I finished both of my soups) but told him that the meat dish looked tasty. He said, "that's the Veal Marsala, would you like it?" I looked at him and said, "Okay. Looks good!" So, on an almost full stomach, I dug right in.

Let's just say it was the first time I ever had Veal Marsala for lunch and I was glad I asked him about the dish. You see, over the years, the Garfield Diner has gotten a reputation for being just a typical breakfast and lunch diner with your typical sandwiches, soups and simple entrees. Bill explained to me again, that he wants people to see the diner in a new light. He wants people to consider the Garfield Diner as a place to have dinner and not just breakfast and lunch.

The Garfield Diner may look like just any other 1950's style diner from the outside, but you really need to consider visiting not only for Breakfast and Lunch, but for dinner as well.
And hey, don't forget to have the soup!
Posted by Schuylkill County Visitors Bureau at 4:18 PM No comments: