Father's day weekend is finally here. I know all of you fathers and even a few mothers are happy that this weekend has arrived, because as you all know, Dad gets to pick the family activities this weekend. Yes, Father's now get a weekend not just a day.
This weekend in Schuylkill County is a busy one .. again. The question is where is Dad going to decide to drag the family? I have a few ideas. (And by the way, if you don't like my ideas, then just go to the Visitors Bureau Calendar and see what floats your boat!
On Saturday we have a few choices to brag about.

First the Gordon Music Festival. This year's event features a variety of entertainments from many genres. Here is the line up for the main stage:

And hey, if you can not make it there on Saturday, they do it all again on Sunday!
Over at Long Trout Winery at 84 Fork Mountain Road check out Island Day (formerly Pirate Day). This is supposed to be a jammin' good time with Jimmy and the Parrots providing fantastic tuneage. According to the press release, beware of he who carries the limbo stick.

On Sunday June 21st, Tamaqua celebrates with their annual Summerfest in the downtown featuring crafts, ethnic foods, free musical entertainment, Tamaqua Street Machine Association antique/classic car show, historic site tours, and much more.
So all of you fathers out there need to get out of the house and explore Schuylkill County this weekend. This is your weekend to get out of the house and do what you want to do, so make plans and enjoy the day (weekend actually).

Posted by Schuylkill County Visitors Bureau at 11:09 AM 1 comment:

I know it has been more than two months since my last entry, but I was recently inspired to get back on the Blog and get blogging again.

A few weeks ago I made my way to Shenandoah for the 2nd annual Kielbasy festival. Yeah I had to park two blocks away, but the walk was well worth it. Weather-wise the day was perfect. Sunny and warm with a few white puffy clouds and I was headed off to the place of yummy food. 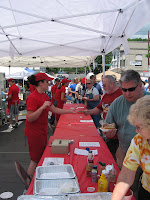 Now since I am trying hard to maintain my ... figure, I resolved to just try two Kielbasy sandwiches. It isn't really fair, because I enjoy Kielbasy, so there was no way I was going to be disappointed. First I tried Lucky's smoked kielbasy with kraut, and then made my way over to Kowalonek's for the same. Both were perfect!! But there was no way I could down another one from the folks at Capital .. maybe next year. Let me just say that I had avoided eating earlier that morning so I could have enough room for food that afternoon. I am glad I did!

But hey, that one block of Main Street was full of people from all over the place. John Guers was there from Upper Schuylkill, Mary Luscavage was running the show from the Downtown Shenandoah Inc. office and Steve Pytak was covering the event for the Republican and Herald. The turn-out was great. 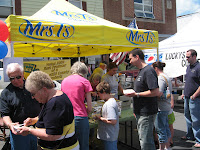 Since it was a Shenandoah event, of course I found Mrs T's Pierogies on hand selling their product to the crowd. Across the street, Dot Demmer had her booth set up and her T-shirts were being sold left and right. I proudly wore my Coal Region Culinary Institute T-Shirt from Demmer Graphics. Throughout the crowd you could see dozens of Kielbasi Festival T-shirts (made by Dot Demmer of course). But I still don't know what "Sto Lat" means!

According to reports, there were a few thousand people attending this year's Kielbasy Festival. I was there for only an hour, but I saw at least a thousand people enjoying the day. You have to go to Shenandoah for next year's festival!